Tomorrow is our two year wedding anniversary, and about a week ago I hit my fifth month of pregnancy. I always knew I wanted to share our infertility journey on here because I found it so helpful reading so many other bloggers infertility stories when we were going through it. It’s a hard road that has a lot of twists and turns, and you never think it’s going to happen to you until it does. So here is how it happened to us. 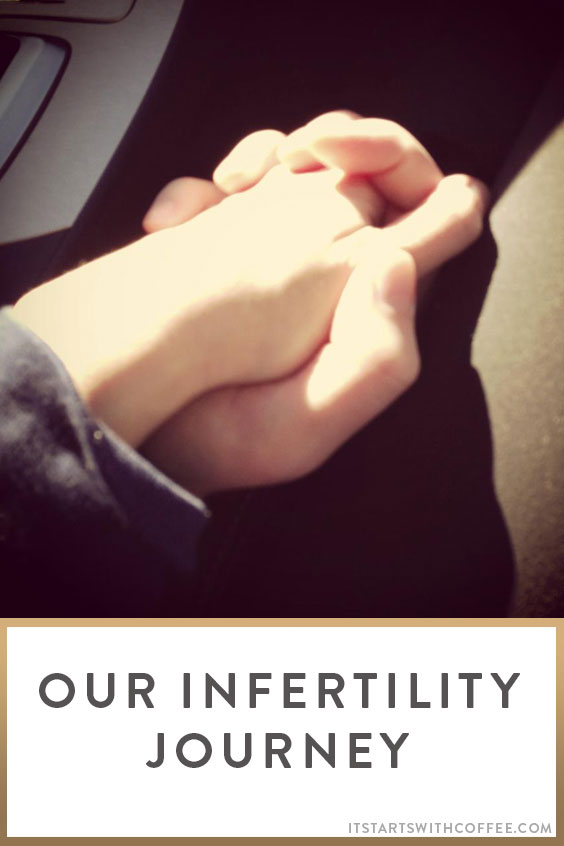 We got married in October of 2014 and knew that once 2015 rolled around we were on the baby path. We knew we planned to buy a house in the spring or summer so we would have plenty of time to get settled before a baby arrived. Because once you start trying of course you think you will get pregnant one two three. And for those that do, that’s great, but for many it’s not that easy.

2015 rolled around and I went off birth control. Looking back I laugh at how OCD I was about my birth control. I got the OPKs (ovulation predictor kits) and figured that it would only take a month or two. Well, my cycle went to a 29 day cycle right away and I figured that was a good sign. But I kept ovulating super late. We tried this way for a few months and no dice. No baby.

In late April I went to a new Dr and she said that we could run some tests to make sure everything was OK. We started on the less invasive tests and everything was fine. Then we did the more invasive tests and discovered a large polyp that would need to be removed. So in July of 2015 I had surgery to remove it. They discovered something called complex hyperplasia which COULD be dangerous if it came back. Once I healed from surgery my Dr felt it was best for me to see an RE (reproductive endocrinologist). In September of 2015 we went to meet with our RE and decided that Clomid would be our first course of action. We also discovered I was not truly ovulating. So we did Clomid at the end of Oct, Nov, and December and guess what…no baby! With Cloimd we upped my dosage each time and we used a trigger shot. We always knew that 3 rounds of Clomid was our limit. Plus to be blunt Clomid made me a psycho. I was horrible. I was moody, irrational, and emotional 24/7. It’s amazing Andrew is still willingly married to me.

In February we started our plan for IVF. We had a probe made to test our embryos for CF as we are both carriers. My cousin actually passed away from CF when he was a teenager and we knew we wanted to test our embryos for CF and other genetic disorders. The probe took a long time to make and I was very impatient. Finally, end of March it was done. We got our meds ordered (which was a giant cluster f***), we learned how to do injections, we were ready! We started our STIM (stimulations) on my 32nd birthday! Yep our IVF start date was my birthday. We took it as a good sign. So for 14 days I did three shots a day. I also went in every other day to have an exam and blood draw to test my levels. Yes, every other day I had blood taken on top of the three shots. I felt like a pin cushion. Then I had surgery (surgery #2 of this process) to remove eggs. They removed 10 eggs, 9 mature, 6 fertilized. We ended up with 4 embryos to biopsy and freeze. Those weeks waiting for the results felt like an eternity!

During the wait I also had to have a third surgery. They discovered another polyp that needed to be removed before our FET (frozen embryo transfer). So I had another surgery and I actually had a really bad reaction to anesthesia this time. I was kind of sick for a few days after. The polyp and hyperplasia came back OK and now we just needed to find out about our embryos. I got the call and we found out we had two grade A perfect embryos, one that was inconclusive, and one with an extra chromosome. All four were boys! That’s how we know we are having a boy 🙂

We made the decision to ONLY transfer one embryo. I had my FET on June 2nd. If you are doing the math that’s almost 17 months after we started trying. About two weeks before our FET I had to start a new injection that I would do until I was ten weeks pregnant. On June 10th I went in for what felt like my 1000th blood draw in the last year and a half. I waited 5.5 hours for a phone call from the nurse. We knew if it was bad news the Dr would call and good news it would be the nurse. Andrew worked from home that day so that I wouldn’t be alone either way. We got the call around 2 PM and my nurse said “Guess what! You’re pregnant!” I cried. Not sobbed but just cried. I felt like every single emotion from the last almost year and a half was pouring out of me. It only lasted for a few minutes and I composed myself enough to hear that I needed to come back Monday (it was Friday) for a repeat blood draw and then we would schedule our first u/s. I had four repeat blood draws. Hey I wanted to REALLY make sure! My numbers kept going up.

We went in on June 27th and heard the most beautiful sound in the world. That baby boy’s heartbeat. We then went back two weeks later and saw him and heard it again. Then it was time to say goodbye to our RE and head back to my OB. So here we are.

I know that was very long and if you read to this point I salute you! I could go into a lot more details about the shots, the emotions, etc. I plan to do another post on the emotional side of infertility. But for now this is our infertility journey and I am so glad to share it!

If you have any questions please feel free to email me or comment below!